One of the many outstanding architectural features of Emmanuel Evangelical Lutheran Church is its stained glass windows.  Those in the Chancel, gallery and west walls were designed and installed when the building was erected in 1928 by the P. J. Reeves & Company of Philadelphia, Pennsylvania.  The windows along the east wall were added in 1968 when the adjoining educational building was demolished and the courtyard created.  For more than a decade, these three windows consisted of large panes of blue and gold “Cathedral glass”, but were replaced in 1981 by the Ann Willet Kellogg Studio of Springhouse, Pennsylvania.  These windows were designed to match the existing 1928 windows and continue the theme of Jesus’ ministry seen in the existing windows.  They purposely depict the three significant Christian experiences which typically take place in the walls of the church building: baptism, marriage and the burial of the dead. 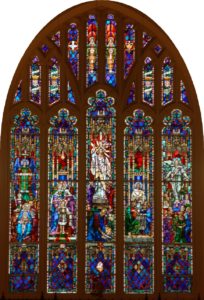 Since the great cathedrals of Europe, stained glass has inspired worshipers of all ages, linking light to life itself and to all that is beautiful and good.  The window over the altar makes the greatest impact on the worshiper because of its sheer size and richness of color.  During the late spring and summer months, its vivid reds and rich blues form a glorious tapestry of glass depicting five major events in Jesus life.  Beginning with the far left panel, the magi are shown with Mary, Joseph and the Infant Jesus.  Above them hovers an angel whose eyes are cast down.  Unknown if this be in adoration, or in sad anticipation of the death which awaits the baby, the angel holds in its hands an expression of the heavenly chorus: “Holy, holy, holy”.  The second scene shows Jesus as a young boy in the temple flanked by Mary and Joseph.  In the background can be seen the learned men of the temple who are in deep conversation and “amazed at His understanding…”  The center panel shows the risen Christ with the empty tomb behind Him.  Three soldiers are shown, hiding their eyes from the glorious sight.  Christ’s right hand is raised in blessing and in His left hand He holds a cross-shaped staff.  From it flutters the white banner with a red cross, symbolizing Christ’s victory over death.  The fourth panel shows the risen Christ breaking bread with the two disciples He met on the road to Emmaus.  The far right panel depicts the ascension of our Lord as the eleven disciples gaze upward toward Him. 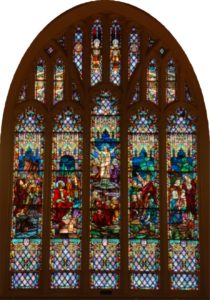 The design of the gallery window is identical to that of the altar window except for its lighter hues.  This difference was probably intentional, as the gallery window floods the nave and chancel with bright morning light, especially in the winter months when the sun is low in the south.  The window depicts scenes from Jesus’ ministry that also relate to our calling to be “little Christ’s” in the world.  The far left panel shows Jesus calling His first disciples from their fishing boat.  The second scene shows Jesus’ midnight conversation with Nicodemus.  Night time is clear, as there is a lighted lamp in the foreground and the Pharisee has a look of confusion, as if to ask: “What do you mean?” to Jesus’ puzzling statement “Ye must be born again.”  The center panel shows the Transfiguration of our Lord, with Peter, James and John watching the mysterious event.  The fourth panel shows Jesus preaching to the multitudes in what is known as the Sermon on the Mount.  The far right panel portrays Jesus’ healing of the sick and reminding us that the ultimate purpose of ministry is the salvation of souls.  By doing so, everything is healed that separates us from God and one another, and Jesus’ invitation to “come” includes that promise. 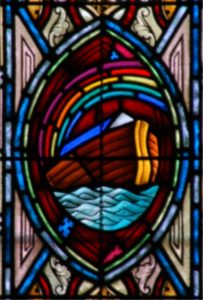 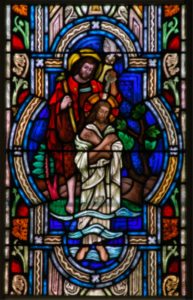 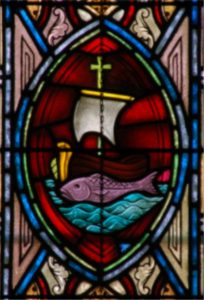 The windows along the east and west walls of the nave also depict scenes from Jesus’ ministry and include two symbols relating to the event.  Moving clockwise around the nave, beginning in the northeast corner, is Jesus’ baptism in the Jordan River and above Him, the descended dove symbolizes the Holy Spirit.  Its placement is significant in that prior to the 2004 renovations of the sanctuary, this window was adjacent to the baptismal font.  The symbol to the left is that of the flood story from Genesis: a rainbow is seen over the ark as it floats on the water which is seen by Christians as the forerunner of baptism.  To the right is a medieval symbol of the church showing a ship carrying faithful Christians through the stormy waters of this life, reminding us that as part of God’s family (the church) we too are able to withstand the evils around us. 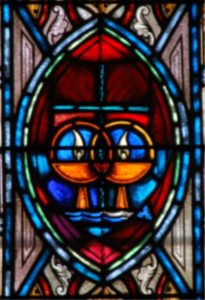 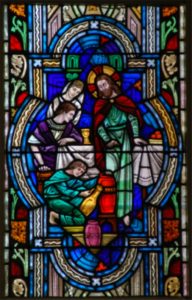 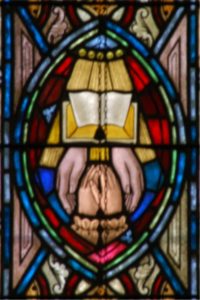 The center window on this wall shows Jesus’ first miracle at the wedding at Cana: the servant is preparing the jars of water which will later be changed into fine wine as the bride and groom look on.  To the left, the symbol of Christian marriage is seen in two lit lamps with the central cross representing the two lives being joined together in Christ.  To the right, adult hands pass the Holy Scriptures down to the up-raised hands of a child indicating the most important task of the Christian family. 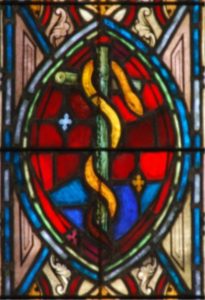 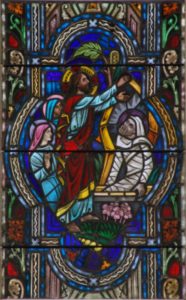 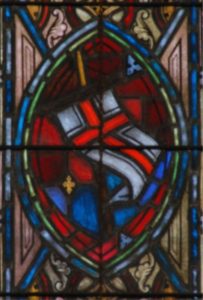 The final window of the east wall shows the raising of Lazarus from the dead.  The left symbol is a serpent on a cross, which relates to the ancient symbol of healing, reminding us the Christ is the ultimate healer.  The right symbol is that of banners flying – the universal symbol for conquest and victory – representing the reward that awaits us with our Heavenly Father. 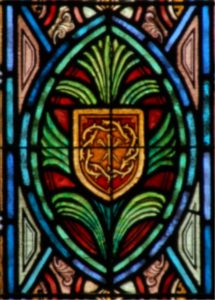 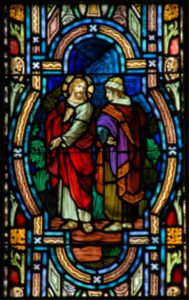 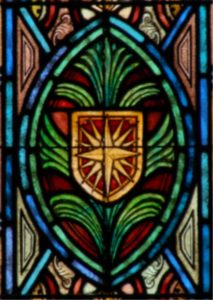 Continuing with the southwest window on the opposite wall of the nave is Jesus’ conversation with the rich young man who asked what he must do to inherit eternal life.  The symbol of the crucifixion – a crown of thorns and nails – can be seen to the left indicating that those who seek eternal life are asked to take up their cross and follow Jesus.  The Epiphany star to the right reminds us of the wise men who accepted the hardship of following the star until they found Jesus. 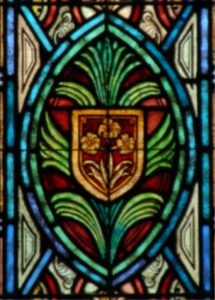 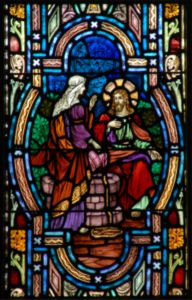 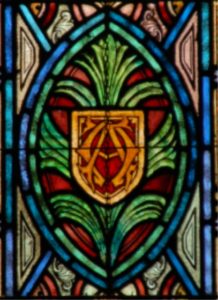 The next window is the account of Jesus’ conversation with the Samaritan women at the well of Sychar.   The left symbol is that for Mary: a shield surrounded by three lilies, representing purity and, when clustered in three, the Holy Trinity.  The right symbol is the intertwined first and last letters of the Greek alphabet, alpha and omega, which portray Christ as the one who was there at the beginning and will be there at the end. 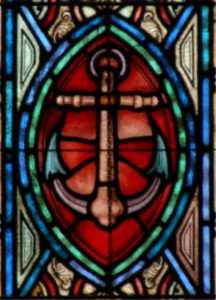 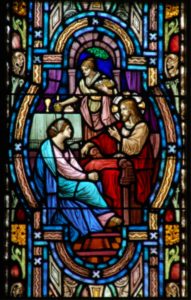 Jesus in the home of sisters Mary and Martha is seen in the next window: Mary is seated at the feet of the Master, listening attentively as He speaks.  In the background is a busy Martha preparing the meal and looking disturbed at the lack of help she is receiving from her sister.  The symbol to the left is that of hope, shown here by the anchor, reminding us that the certainty of our Christian hope makes it possible to be attentive to Christ in any situation.  The symbol to the right is the descending dove, representative of the Holy Spirit which allows us to understand God’s will in the words we hear and read in the Holy Scripture. 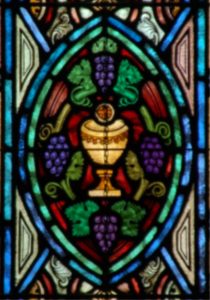 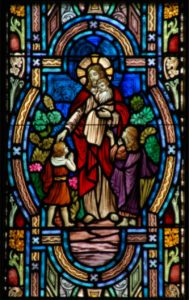 The final window on the west wall depicts Jesus surrounded by children.  It is by fortunate coincidence that this scene is directly opposite to the baptismal window, as one enters into God’s family through baptism typically as infants or children.  The chalice and wafer surrounded by vines and clusters of grapes to the left symbolizes communion as the way in which we are closest to Jesus’ invitation to “become as little children” if we wish to enter the Kingdom of God.  The cross and crown symbol to the right reminds us that the child-like faith we are to have until death will win for us the crown of life. 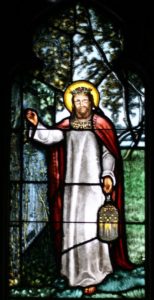 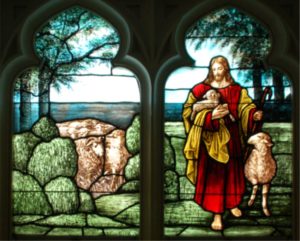 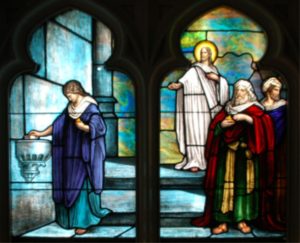 Several windows from the original 1903 church were carefully incorporated into the present structure, giving us a vivid link to previous generations of Lutherans who worshiped on the same site.  The first is the single window at the far west end of the Narthex.  A reproduction of the famous painting by Holman Hunt, it shows Jesus knocking on a closed door.  His promise: “Behold, I stand at the door and knock: if any man hear my voice and open the door, I will come into him and will sup with him, and he with Me.” tells us that it is our choice to open the door and let Christ in.  Passing by this window upon entering or leave the church, we are reminded of the choices made in our daily lives.  Two other windows, one in the Sacristy and the other on the second floor in the Pastor’s Sacristy have particular meaning as well.  The Sacristy window is of Christ the Good Shepherd.  It memorializes a former pastor (Rev. George S. Fegely), and fittingly does so, as a pastor is often thought of as the “shepherd” of a flock.  The widow giving her only mite is depicted in the window in the Pastor’s Sacristy.   At the time of the buildings construction, this was the room that the Church Council met in to discuss the business of the church.  The widow is a reminder of faith and commitment that all of us in the church strive for. 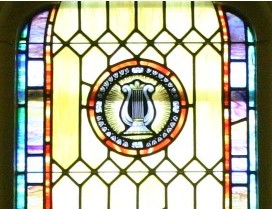 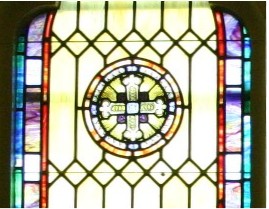 The first three windows above are in the Prayer Chapel located next to the library on the second floor. The final window is in the gable of the sanctuary above the gallery window.